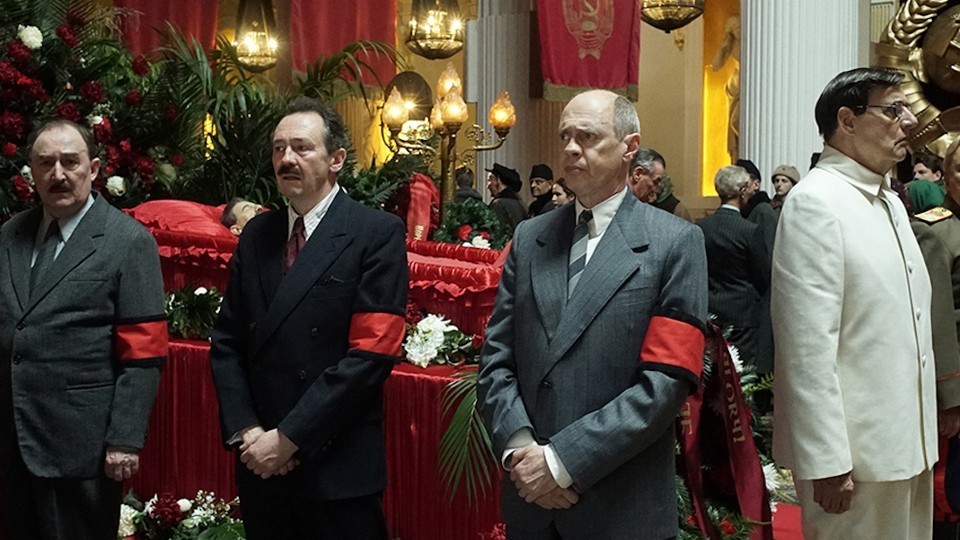 “The Death of Stalin” sounds like a boring documentary that the History Channel would run on a rainy Sunday afternoon.

What it doesn’t sound like is the funniest and nastiest film of the year so far.

And that’s thanks to Scottish satirist Armando Iannucci.  You may not know his name, but you likely know his work.  In addition to landing an Oscar nomination for writing the scathing 2009 comedy “In the Loop,” he also was the creator of a little HBO show called “Veep,” for which he was nominated for 7 Emmy Awards (and won two in the process).

Iannucci’s specialty is politics, focusing more specifically on the ego-driven knuckleheads who have no idea how to govern but who will stab each other in the back to get a job that will indeed demonstrate how little they know.  Seriously, just take a look at the clueless characters that surround “Veep’s” Selena Meyer (Julia Louis-Dreyfus) and ask yourself just how different are these dolts from the likes of Jeff Sessions, Betsy DeVos, Ben Carson or Scott Pruitt?

One evening, after it becomes clear that Molotov will be the next to be executed, Stalin suffers a fatal cerebral hemorrhage, and any hope of reviving him is gone because all of the best doctors are imprisoned in his gulag.  His sycophants rush to his side, and that’s when the lust for power begins to rear its ugly head, each justifying his every self-promoting move as something that Stalin would have wanted.  Then add to the mix Stalin’s children — his focused daughter Svetlana (Andrea Riseborough) and his cuckoo alcoholic son Vasily (Rupert Friend), and the result is chaos at the highest level.

Iannucci’s humor is not your typical laugh-out-loud jokes, but at his best, it usually evokes shock and an open-mouthed “Did he really say that?” reaction.  For example, in one scene regarding a new target, Beria casually suggests “Put him on the list, and his wife, and shoot him first so she sees it.”  And when Vasily declaims that he wants to speak at his father’s funeral, Khrushchev dismisses him with “And I want to fuck Grace Kelly.”

The other good decision that director Iannucci made was to let his cast speak in their own accents.  So that when, as Stalin, McLoughlin opens his mouth and nothing but pure Cockney comes out, it’s momentarily shocking, but you can tell that the actor is comfortable in Stalin’s skin without a phony Russian accent.  Same with Buscemi, whose Khrushchev is pure Brooklyn.  It sounds wrong, but it’s so right.

As with any effective satire, the characters are a means to an end and don’t bear deep scrutiny.  For the most part, you don’t know (or care) very much about Stalin’s scheming cabinet ministers, and we can only judge their effectiveness by how good their lines are.

Fortunately for “The Death of Stalin,” the zingers are very good indeed, and you can only walk out of the theater, shaken by some of those one-liners, and say “Yikes!”