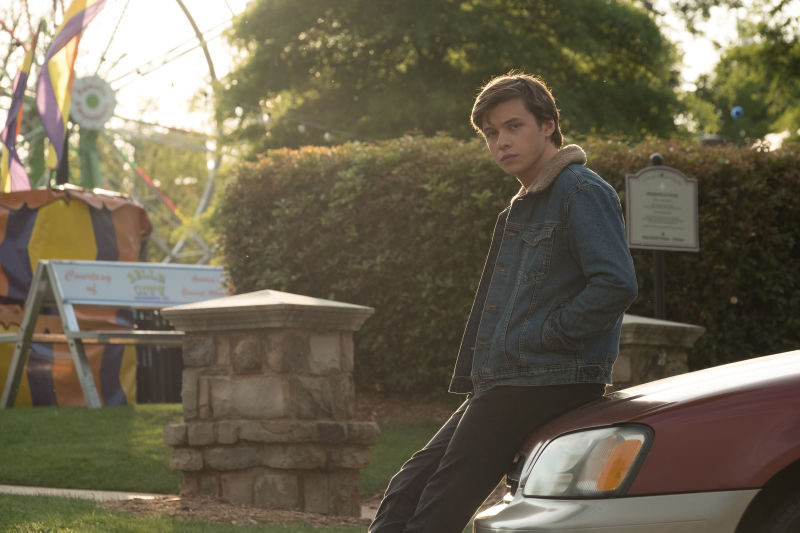 When I first saw the trailer for “Love, Simon,” I thought to myself that it looked like the Best Picture of 1995.  In an era of such sophisticated coming-out stories as “Moonlight” and “Call Me By Your Name,” the “Love, Simon” trailer seemed almost simple in its depiction of the process, with lines such as

“I’m just like you.  I have a totally perfectly normal life.  Except I have one huge-ass secret.”

Once the film was released, however, I had a bit of a change of heart.  High-school kids didn’t line up to see “Call Me By Your Name.”  But they are going to see “Love, Simon” in droves, and whatever qualms I may have about the film as a film, the message of “Love, Simon” is resonating with the right audience.  And that’s a good thing.

Simon (Nick Robinson) lives in an affluent suburb just outside of Atlanta.  He’s not a super jock or a brainiac, but just an average (very) good looking high school kid who likes to drink iced coffee and hang with his crew — longtime friends Leah (Katherine Langford) and Nick (Jorge Lendeborg, Jr.) and a new one, Abby (a terrific Alexandra Shipp).

When Simon stumbles across an online admission by a fellow classmate (nicknamed “Blue”) that he is struggling with his own sexuality, Simon begins an e-mail correspondence with Blue, all the while wondering just who he might be.

Unfortunately, Simon’s secret is discovered by socially-awkward classmate Martin (Logan Miller) who threatens to reveal his correspondence unless Simon sets him up with Abby.  Simon, who simply wants to get through his senior year without drama and wait until college to forge a new identity, gives into the blackmail and winds up betraying his friends.

While I wish that a coming-out story didn’t involve blackmail and that being gay is something of which a person needs to keep a secret, but in high school it’s still an enormous fear even today, with bullying and violence a very possible consequence.

My other issue with the film is that it follows all the overly-familiar beats that other coming out films before it have struck.  And, seriously, Simon has progressive parents (Jennifer Garner & Josh Duhamel) and a network of supportive friends.  Yes, it’s hard to come out, but there are kids all over this country who don’t have the same support system of parents and friends as Simon for whom the struggle to be themselves requires even more courage for them to be free.  Now that’s a story that I’d really like to see.

“Love, Simon” is a very sweet film — I defy you not to shed a tear at the final ferris wheel scene — but it is at times just too adorable, playing it safe to give its teenage audiences just what they want and nothing more.  But the fact that a major Hollywood studio (in this case, 20th Century-Fox) is willing to bankroll a John Hughes-like teen comedy with a gay character at its center is progress.  “Love, Simon” may not change the face of film, but it may make a difference in the lives of questioning kids for years to come.