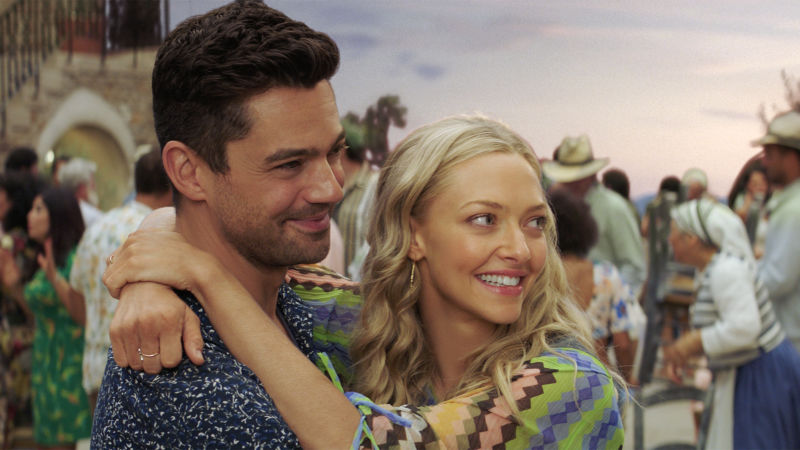 “Mamma Mia! Here We Go Again” is magnificently ridiculous or ridiculously magnificent.  I’m not quite sure which.

When I first saw the trailer for the sequel to the fabulously successful 2008 “Mamma Mia!”, I thought to myself, “Well, here’s a sequel that no one needs, so I can just skip it.”  Then when critics I really respect began to suggest that we give this a second look, I got intrigued.  And wouldn’t you know it, not only is this sequel good, but in several ways it surpasses the first film.

Let me explain.  It’s not a spoiler since it’s implied in the trailer, but Meryl Streep’s Donna has died, and her daughter Sophie (Amanda Seyfried) who is still on the Grecian island of Kalokairi, wants to honor her mother by turning their home into a B&B, naming it Hotel Bella Donna.

Then something interesting happens narratively when its story structure turns into “The Godfather Part II.”  (Don’t laugh.)  Like that Francis Ford Coppola classic that took the events at the end of the first “Godfather” film and moved them both forward and backward, so do we do that here with how the young Donna (Lily James, who steals every scene she is in) first came to Kalokairi, intercutting it with Sophie’s contemporary effort to honor her mother’s memory.

The editing here is top-notch, as are all the film’s production values, and Ol Parker’s direction in particular really nails the proper tone.  He brings the many elements of the film together seamlessly — five minutes into the film, I felt my skeptical self relax, realizing “OK, I’m in good hands.”

The only area that I had some question was in Parker’s screenplay — it’s not bad by any means, but there’s not much conflict in it.  It’s a celebration of Donna’s life and of Sophie bringing new life into this world, both of which are joyous.  But there’s little in “Here We Go Again” that will keep you on the edge of your seat.

Still, there’s the ABBA songs.  Although the first “Mamma Mia!” hogged most of the famous ones, “Here We Go Again” unearths some undiscovered gems from the group’s library, and Parker manages to stage the unfamiliar songs in a context in which they make absolute sense dramatically.  Plus some of the old favorites are back, including the title number.  “Waterloo” is set in a French restaurant and is one of the best-staged film musical numbers in years.  And “Dancing Queen,” with a flotilla of boats filled with singers and dancers, looks like the gayest version of “Dunkirk” ever.

Most of the cast of the first film are back, and Seyfried in particular deserves much of the credit for making the contemporary scenes work.  Best of all:  Pierce Brosnan does not have a musical solo.  The flashback sequences are filled with a new young cast (Jessica Keenan Wynn, for example, is a dead ringer for the young Christine Baranski), and they are led by a wonderful performance by Lily James (“Downton Abbey,” “Cinderella”), who captures the-sky’s-the-limit optimism of a young Donna.

Have I forgotten anything?  Oh yes, Cher is in this, isn’t she?  It’s the best movie star entrance in years.  I have never seen an audience erupt in wild applause at the sight of a single high-heeled foot emerging from a helicopter.  The idea of Cher playing a great-grandmother may seem like a bit of a stretch, but she’s Cher for goodness sake, so she pulls it off.  And she has one of the film’s best moments as she looks across the room and sees a former love — Sophie’s manager of the B&B, Seńor Cienfuegos (Andy Garcia).  And wouldn’t you know it that his first name is…wait for it…Fernando.  Cue the music!

I went into “Mamma Mia! Here We Go Again” expecting (and wanting) another guilty pleasure, but instead, to my surprise, I got an extremely well-made film.  And still a great deal of pleasure guilty or not.