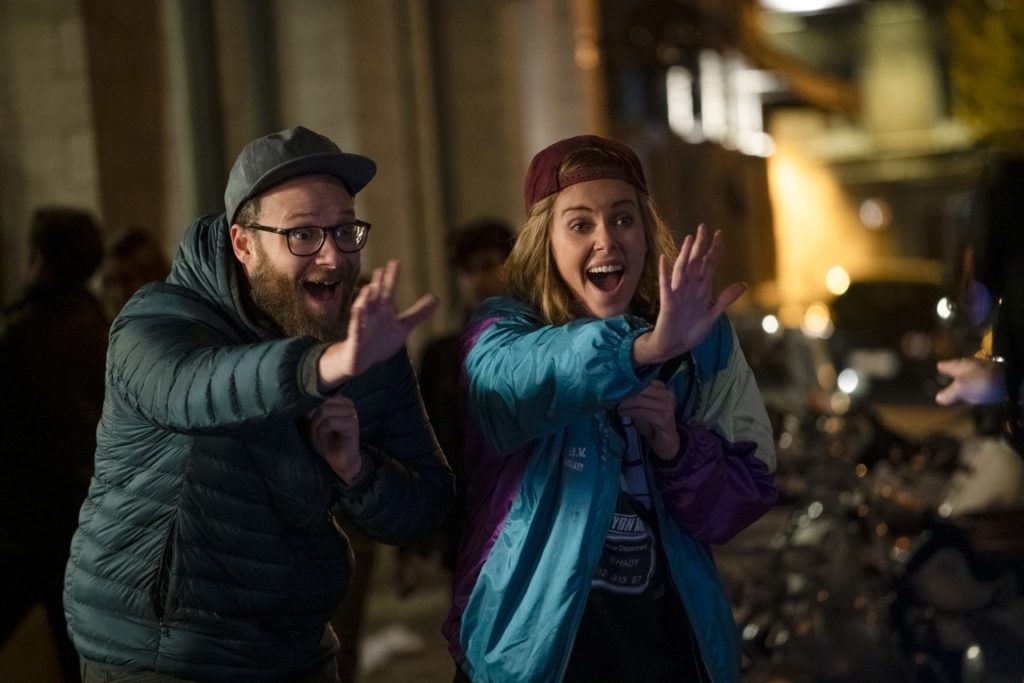 The plotline of “Long Shot” is absolutely preposterous.  And, for the most part, it’s absolutely wonderful.  Romantic comedies for adults that are good have been in woefully short supply in recent years, and when one comes along that takes the risks that “Long Shot” does, whatever its flaws, I’m all in.

Here’s the set-up: Charlotte Field (Charlize Theron) serves as U.S. Secretary of State under President Chambers (Bob Odenkirk), who once played the President on a “West Wing”-type of TV series and is now the President for real.  Needless to say, he’s totally in over his head and in the pocket of powerful interest groups.  At a meeting in the Oval Office, he tells Charlotte that he’s not seeking reelection because he wants to try something really challenging — breaking into movies — and offers to endorse her to succeed him.  On paper, Charlotte would seem to have everything in place for a successful run except for one thing.  According to her polling guru Katherine (Lisa Kudrow), the public perceives her only flaw to be a lack of a sense of humor.

Meanwhile in Brooklyn, investigative journalist Fred Flarsky (Seth Rogen), having just escaped with his life after infiltrating a group of white nationalists, returns to the office to find that his newspaper has been sold to the ruthless Parker Wembly (Andy Serkis), a Rupert Murdoch prototype, whose ethical standards Fred abhors. Fred quits in a righteous huff, then gets home and realizes he’s out of a job.  Depressed, he phones his best friend Lance (O’Shea Jackson Jr.) who offers to take him to a charity function where Boyz II Men are performing.

There Fred locks eyes with the elegant Charlotte, and a hint of recognition flashes in her eyes.  It seems that, as kids, Charlotte and Fred were next-door neighbors, and she was always his babysitter.  She recalls how, as a teen, he cheered her political proposals on helping the environment and thought of him as the most supportive friend she could have.  Upon learning that Fred is now a journalist, Charlotte later checks out his columns and realizes that, not only can he write, but he knows her, and he’s funny.  Just the writer she needs.

Much to the horror of her manager Maggie (June Diane Raphael, hilarious), Charlotte hires Fred as her new speechwriter.  Maggie warns her boss that this is going to be a disaster, and once the slovenly Fred comes on board, it looks like Maggie may be right.

When I first heard that Charlize Theron and Seth Rogen were announced as the romantic couple, it sounded to be as if a casting director had picked two names out of a hat at random.  But as unlikely as it sounds, these two have a chemistry together that took me completely by surprise.

To most of America, Theron’s Charlotte might seem to be an ice queen, but in this skilled actress’s hands, she is a fascinating contradiction, anxious to rise in her career so that she may do greater good, but still yearning for a life of normalcy.  It’s at this point that most romantic comedies lose their nerve and turn to Jell-O.  The strong powerful woman (usually Sandra Bullock), realizes, after a few bumps in the road, that the man of her dreams has been in front of her all the time, and she chucks her career path to embrace a life of domesticity.

What makes “Long Shot” different is its adamant refusal to fall into that trap.  If anything, falling for this big bearded schlump of a guy only reinforces her life’s path and makes Charlotte even stronger, and Theron’s funny and complex performance only bolsters Charlotte’s strength.

Speaking of big bearded schlumps, has anyone noticed what a terrific film actor Seth Rogen has become?  Anyone who saw his work navigating Aaron Sorkin’s dialogue in “Steve Jobs” or his performance in “The Disaster Artist” would know it by now.  Forget, if you can, what’s surrounding him in his gross-out comedies — look at the characters he creates within them.  And “Long Shot” is no exception.  As funny as he is, his Fred Flarsky is no joke — his journalism tools are solid, he knows how to write and he knows how to read people (Charlotte in particular).

If there is a problem with “Long Shot” it’s that director Jonathan Levine (who worked with Rogen on the slob comedy “The Night Before”) and writers Dan Sterling (“The Interview”) and Liz Hannah (“The Post”) felt the need to pander to Rogen’s fans by introducing some desperate gross-out humor which rests very uneasily beside the smart political comedy that distinguishes the rest of “Long Shot.”

This spring is looking to be a promising time for film comedies, with such highly-regarded films as “Non-Fiction,” “Booksmart” and “Late Night” coming down the pike.  “Long Shot,” though, has set a pretty high bar, and we can only hope that those comedies can come close to this film’s laughs and smarts.