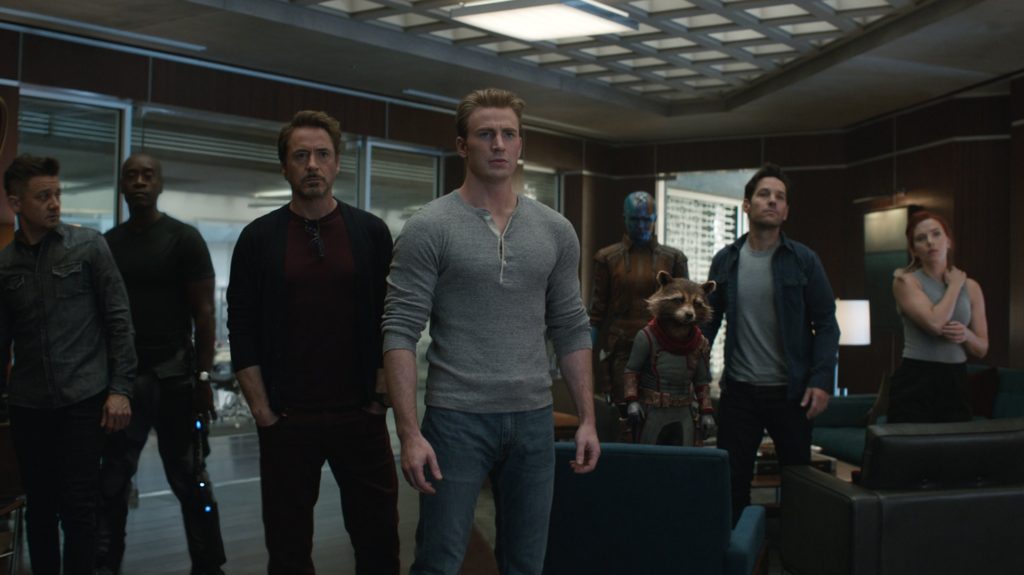 You know you’re going to see it, if you haven’t already.  So let’s talk about it.

Faithful readers of this column know that I’m not the biggest fan of Marvel comic movies.  (I’m even less of a fan of the D.C. comic universe, but that’s a different discussion altogether.)  I usually find that the first acts of the Marvel films tend to draw me in, as the writers desperately try to squeeze in some characterization before the inevitable CGI battles that make the films’ third acts so fatigue inducing.

I wasn’t a huge supporter of the first film in this two-parter, “Avengers: Infinity War” (2018), even though it was nice to see the ever-growing band of superheroes get together again.  Yet that movie’s insistence on giving each of the characters a movie-star introduction largely wasted the film’s first hour.  But (and this shouldn’t be a spoiler since “Infinity War” opened a year ago), the evil Thanos (Josh Brolin) has acquired the six powerful infinity stones and uses that power to rid the world of half of its population and half of the Avengers team.

“Avengers” fans are very insistent that there be no spoilers of “Endgame” online, and I will respect that, so let’s just say that “Endgame” deals with the surviving members of the team and their discovery that there is a way that they can turn back time and leave it at that.

Unlike “Infinity War,” which at times resembled a traffic jam of Marvel characters, the first hour of “Endgame” slows things down to take the time to explore grief and loss that the surviving members of the Avengers are working their way through.  It’s almost as if they are acting as surrogates for the Marvel fans, who know that these last two films may be the final time we will see some of these characters on-screen.

It’s a bold way to begin a highly-anticipated tentpole movie, especially one that runs 3 hour and 1 minute, time that Marvel might have been expected to give us even more mindless computer-generated battles.  Instead, they have chosen to give us something that’s — dare I even say the word? — meaningful.

In addition, the leisurely running time provides an ample opportunity for directors Joe and Anthony Russo to shine a spotlight on several previously underused characters — Ant-Man (Paul Rudd), who was the focus of two films but was not a part of “Infinity War,” as well as Hawkeye (Jeremy Renner) and Black Widow (Scarlett Johansson), who never even got movies of their own.

The heart and soul of “Endgame,” though, are probably Robert Downey Jr.’s Tony Stark/Iron Man and Chris Evans’ Steve Rogers/Captain America, two superhero characters who have had their differences in the past but who seem to sense that the end of the Avengers may be near.  So they bury their differences and band together to go back in time to try to undo what Thanos has done.

I don’t mean to give you the impression that this “Avengers” is a massive character talk-a-thon — you can get plenty of that in other movies.  One the action scenes begin, the film delivers all the mayhem that “Avengers” fans are seeking, and, for me at least, while the film threatens to buckle in the third act under the weight of all that CGI, the cheers from the audience are in all the right places.

While the film’s ending may not always seem like your typical feel-good valentine, its conclusion feels satisfying, an emotion that is much more difficult for filmmakers to evoke, and the Russos and their cast achieve it.  After 21 previous Marvel films, “Endgame” certainly feels like the right way to bring this first chapter of the Marvel Comic Universe to a close.  But why do I have the feeling that there’s a chance that there might be more chapters to come?

NT Live: “All About Eve” — The Zingers Are All Here, But Where’s the Heart?