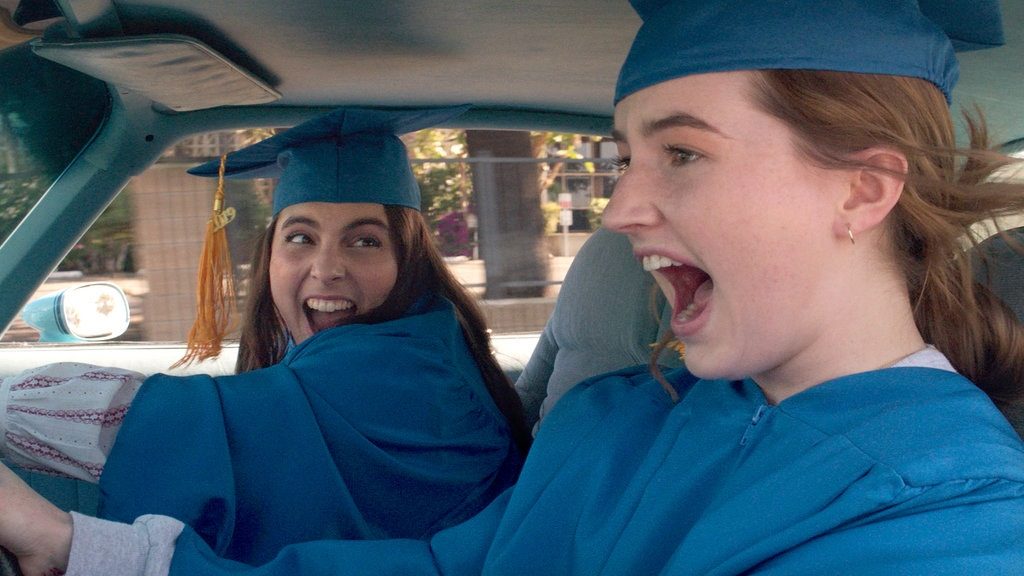 There are a number of great “one last party” high school comedies.  “Superbad” is a good example.  “American Graffiti” is even better.  Now comes Olivia Wilde’s “Booksmart,” which belongs way up on that list.  Not only is it one of the funniest laugh-out-loud comedies I’ve seen in recent memory, but it’s the one of best pictures (if not the best) released so far this year.

Actress Olivia Wilde’s impressive directorial debut brings back all of the horrible memories that many of us have of high school, focusing on two lifelong friends (and brainiacs) Molly (Beanie Feldstein) and Amy (Kaitlyn Dever) as they negotiate the final day before graduation.  Molly, in particular, having devoted four years to studying intensely, is happy that her hard work has paid off in her acceptance into her chosen college, Yale, and Amy is content in her decision to take a year off to do charity work in Africa.

Behind a stall in the school’s unisex bathroom, however, Molly overhears a trio of slackers discussing what a pill she is as a classmate.  When she emerges to remind them that she got into Yale, the skateboarder tells her the he has been accepted to Stanford on a soccer scholarship, another slacker tells Molly that she will be joining her at Yale, and the third says that he is forgoing college.  Molly finds some satisfaction in that until he explains that he’s decided to accept a mid-six-figure salary job at Google.

Wait, wha???  At that moment, Molly’s world is shaken to the core as she realizes that while she and Amy ignored partying to that they could get into esteemed schools, the party people wound up being admitted to similarly great schools.  Unfair!  So Molly, taking charge as usual as she is class president, tells her friend that that night, the evening before their graduation, they’re going to party like no one has ever partied before.  (Amy is skeptical.)

That party night begins like many others in high school school films, but the antics at times become a bit stranger and more unexpected with a tone closer to Scorsese’s “After Hours” than your usual teen comedy.  But with an assured script by four women screenwriters and sparkling work by first-time director Olivia Wilde, “Booksmart” can more than handle the unexpected.

“Booksmart” deftly avoids many of the clichés that have become all too familiar in tired high school movies — there’s no sneering jocks pushing frightened nerds into school lockers, for example — and while there are rigid cliques during school hours, many of those barriers are dropped at the seniors’ final party with even a few moments of (dare I say it?) kindness breaking through.

That generosity of spirit extends to how Wilde handles the film’s supporting roles, particularly with the school’s theatre kids — George (Noah Galvin) who insists on telling you about his time in Bar-theh-lona, and his drama compatriot Alan (Austin Crute) who will dare to do almost anything.  Also finely detailed are Nick (Mason Gooding), Molly’s VP who comes off as a jerk during the day but can show unexpected sensitivity at the most surprising times, and especially Gigi (Billie Lourd, who is primarily known now as Carrie Fisher’s daughter but who will soon be known for more), who is almost indescribable in her uniqueness and about whom I’d love to see an entire movie.

Still, as Molly and Amy, the film’s two leads carry the bulk of the material and shine all the way.  Feldstein makes it clear Molly is clearly the dominant one of the pair, yet the actress subtly indicates insecurities in Molly that her bravado tries to hide.  Feldstein (who was so good as Saoirse Ronan’s best friend in “Lady Bird” and whom I had the great fortune to see on Broadway going toe-to-toe on stage with Bette Midler in “Hello, Dolly!”) only needs to suggest how important her friendship with Amy has been to allow us to see this young woman’s vulnerability.

Even better is Dever as Amy, a young woman who has had the strength to come out at school two years earlier, is encouraged by Molly to pursue the girl of her dreams.  Yet, when Molly argues that she lacks the courage to stand up to her, Amy does more than that and proves to the entire class her firm backbone in support of them.  Just an aside, but “Booksmart” displays some of the most positive examples for LGBTQ youth that I have seen in a recent film.  Granted, Amy is living in somewhat of an ideal situation, with supportive classmates and parents (Will Forte and Lisa Kudrow, both wonderful), that doesn’t reflect the struggle that many gay kids have to endure, but if any LGBTQ teens are looking for a positive example of hope for them, “Booksmart” is that film.

Usually when there are four credited screenwriters, that’s a big red flag, warning that there’s something wrong with the film, but that’s certainly not the case here with the incisive script by Emily Halpern, Sarah Haskins, Susannah Fogel and Katie Silberman.  I hope that this quartet stays together for at least another film or two, because we need scripts as sharp as this.  Add to that an assured directing debut by Wilde, who appears to have the kind of directorial instincts that have eluded many other directors who have made ten times more films.

I have heard grumbling in a few quarters that “Booksmart” presents too rosy a view of the horrors that many of us endured through years of high school.  That may be true for some, but even if it is, so what?  Everybody has their own high school story to tell, and I only wish that my day-before-graduation had the kind of wit and fun that represents “Booksmart.”