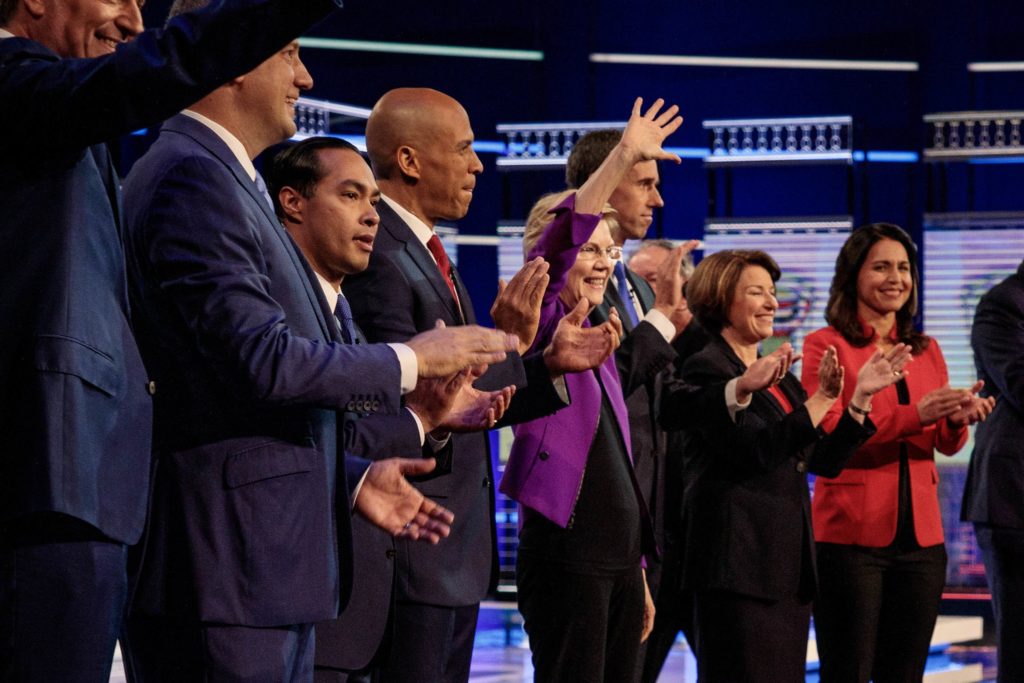 Spring training is over.

Opening night for the race for the 2020 Democratic Party nomination kicked off in Miami FL with Part I of this year’s Democratic Party debates.  The 20 candidates who have amassed more than 65,000 individual donors and have shown over 1% in three designated national polls were invited to debate on June 26 and 27th.  The candidates were divided into two groups of 10, and who spoke on which night was decided by the luck of the draw.  The names of candidates polling above 1% were placed in one bowl, while those under 1% were in the other, and the blind draw was to make sure that candidates were evenly distributed each night.

This system was designed to ensure that the Dems would avoid the debacle of the early GOP debates in 2015 where the leading candidates appeared in a prime-time debate, whereas the less popular candidates views in a non-primetime debate, derisively called “the kiddie table.”  Unfortunately for the Democrats, a bad luck of the draw resulted in essentially their own “kiddie table,” with only one of the five top tier candidates, Elizabeth Warren, being selected to appear on Wednesday night’s debate.

So how did they do?  Through my very subjective eyes, here are my thoughts on the evening’s winners and losers:

JULIÁN CASTRO – The former HUD Secretary for Barack Obama, Castro came roaring out of the gate when asked his first question.  Citing the haunting photograph of a migrant father and his daughter lying dead on a riverbank, Castro explained his position on immigration reform clearly and succinctly, and he basically cleaned rival Beto O’Rourke’s clock when it came to the question of whether crossing the border illegally should be a crime, suggesting that Beto would be better informed if he did his homework on this issue.  Ouch.  Castro was easily the surprise of the night.

ELIZABETH WARREN – The fact that Warren had a strong night came as no surprise given her ability on the stump to explain complex economic plans in terms that even dopes like me can understand.  She aced the answers on the first three questions that she received in the debate’s first half hour but receded later in the evening (through no fault of her own) when second-hour moderators Chuck Todd and Rachel Maddow asked her very few questions.  One warning however — Warren planted a potential landmine for herself when she supported the elimination of all private insurance in her “Medicare For All” plan, an idea that might play well in a primary but would likely blow up in her face in a general election.

CORY BOOKER – To the surprise of many, Booker’s candidacy has been slow to catch on, landing him in the middle tier of contenders.  Yet he turned in one of the evening’s best debate performances, particularly on the subject of gun violence, dramatically asking the other candidates if they live in a neighborhood, as Booker does, where seven people were shot that week.  Booker was also solid on the rights of transgender Americans, decrying in particular the many reported acts of violence against trans African-Americans.  This solid performance, coupled with a raised profile from his recent kerfuffle with Joe Biden over Biden’s prior work with segregationists, may help propel Booker’s campaign back near the top tier.

BILL DeBLASIO – The New York city mayor’s campaign was widely mocked by his hometown press, and its late start allowed him to barely squeeze into the 20th spot for the debate.  But in typical DeBlasio fashion, he elbowed his way into numerous conversations, interrupting as he went, in a manner that some commentators thought was obnoxious, but that’s typical DeBlasio.  Still, he had a touching story about his African-American son and movingly recalled father, who suffered from PTSD, which led to his dad committing suicide.  Like him or not, DeBlasio made sure that, even as a 20th place candidate, he figured into the news recaps last night.

AMY KLOBUCHAR – While Klobuchar didn’t produce a campaign-changing moment Wednesday night, she did fire off two great one-liners that did make all of the news recaps.  When Washington Gov. Jay Inslee boasted that he was the only candidate on the stage who truly had advanced the ball on women’s reproductive rights, Klobuchar countered his mansplaining by reminding him “I just want to say there’s three women up here who have fought pretty hard for women’s right to choose.” Boom!  And when the subject of Trump conducting foreign policy by tweet came up, Klobuchar cracked, “I don’t think we should conduct foreign policy in our bathrobe at five in the morning.”  It was not a game-changer of a night for the Minnesota senator, but two great one-liners managed to keep her in the conversation the next day.

BETO O’ROURKE – The one-time wunderkind from Texas has seen his numbers fall in the past few months, and last night’s debate may only accelerate his decline.  From answering his very first question on the economy  in Spanish at first (an odd move right off the bat) to being told by fellow Texan Castro that he needs do to his homework if he wants to discuss immigration reform, it was a bad night for Beto, who came off as underprepared and under-informed, playing right into the doubts that many have that he’s a lightweight.  There’s only one chance to make a first impression, and the congressman pretty much squandered it.

TULSI GABBARD – The Hawaii Representative made a strong pitch to be named Secretary of State in a Democratic administration as an isolationist, although that position is closer to Trump’s than to any Democratic candidate.  But she’s got to figure out a better way to explain her anti-LGBTQ past, or else she’s going to have a major problem when primary votes begin to be counted.

CHUCK TODD and NBC NEWS – I’m usually a fan of Todd’s on “Meet the Press” but last night, he not only hogged the questioning, leaving precious little time to Rachel Maddow, a better questioner.  But when the subject of gun safety came up, he seemed obsessed with trying to get at least one candidate to come out in favor of gun confiscation.  When one wouldn’t rise to the bait, he’d move onto the next.  Chuck’s game of “gotcha!” was puzzling to say the least and ultimately unproductive.  By the way, NBC News has had months to prepare for this night, and the sound snafu at the beginning of the second hour was unfortunate at the very least and robbed the debate of much of its momentum.

Well, let’s see if NBC News can get the sound right tonight for the second debate, where we’ll see Biden, Sanders, Harris and Buttigieg go at it on NBC stations, including MSNBC and Telemundo at 9pm EDT/6pm PDT.  Be there or be square!