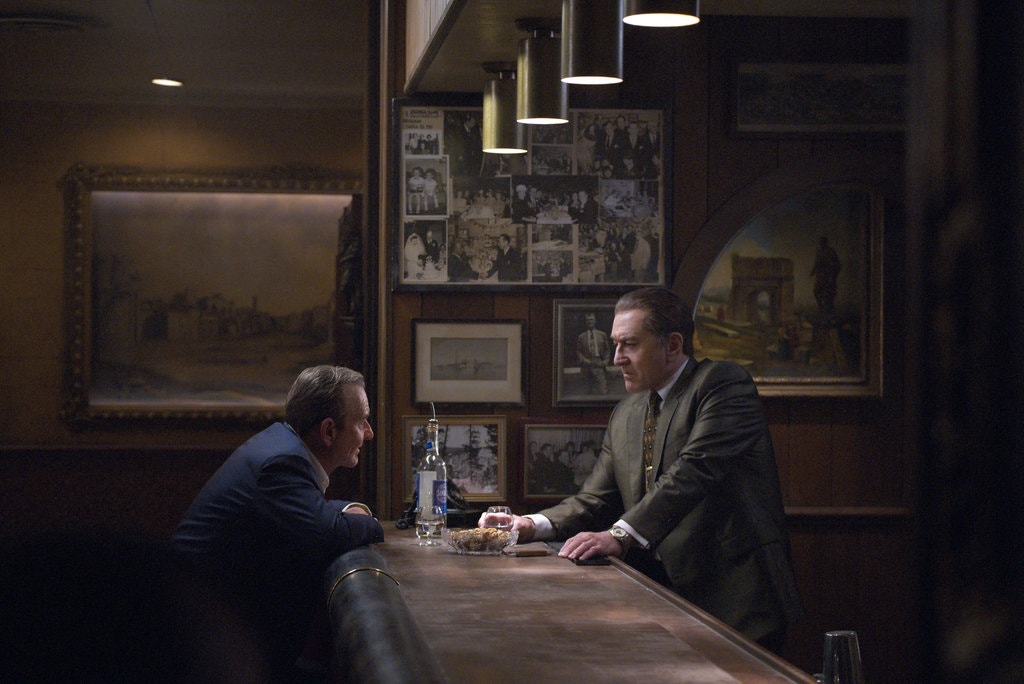 “The Irishman” may be set in the world of gangsters, but it’s not really about crime.  When all is said and done, it is a melancholy meditation of our universal fear of death as we inevitably get older.

Have no fear, though.  Martin Scorsese, arguably our best living American filmmaker, has not gone soft on us.  “The Irishman” is as tough a gangster film that he has ever made, and he has made some great ones, including one of the best, 1990’s “Goodfellas.”  “The Irishman” can proudly take its rightful place beside the very best of them.  Yet, at the same time, it stands apart from them.

“The Irishman” has been playing in theaters that will show Netflix films since November 1 (and please see it on the big screen if you can!), but the film is now available at home to anyone who has a Netflix subscription.  Just a warning: “The Irishman” runs 3 hours and 29 minutes, but I guarantee you that it will be among the best 3 hours and 29 minutes you’ll spend with a movie this year.

Make no mistake, “The Irishman” is major Scorsese, which means that it’s major moviemaking.  The film is based on the 2004 book “I Heard You Paint Houses” by Charles Brandt, which purports to tell the life of Mafia hitman Frank “The Irishman” Sheeran (Robert De Niro).  Frank is a semi-shady meat delivery man who has a chance encounter with the helpful Russell Bufalino (Joe Pesci).  When Frank’s job is imperiled, he turns to his lawyer Bill (Ray Romano, terrific) who introduces Frank to his cousin, who just happens to be Frank’s former guardian angel Russell.

Speculating that Frank might be someone he can use, Russell, who heads the Buffalino crime family, asks him to do some menial jobs, and Frank quickly proves himself, rising up in the ranks in the family to soon become Russell’s right-hand man.  It is only then that Russell trusts Frank enough to put him in touch with a big fish — Teamsters Union President Jimmy Hoffa (Al Pacino).

They meet via phone.  Hoffa asks Frank “I heard you paint houses” [Mafia speak: “I heard you’re a contract killer”], and Frank replies “Yes I do, and I do my own carpentry” [“And I clean everything up after the hit”].  And suddenly a beautiful friendship is born.

Although Scorsese is a great director of women (just ask Ellen Burstyn or Cate Blanchett, both of whom won Oscars for Scorsese films), the director has always seemed most at home exploring the fraternal bonds among men.  And there are many intersecting bonds at work in “The Irishman,” some in violent contrast with each other.

It’s a joy to see De Niro and Pesci working together again, not to mention Pacino (who worked with De Niro in two films), and the result is a confluence of great acting, with one performance complementing another.  Pesci retired from acting two decades ago and agreed to appear in “The Irishman” only after an intervention by De Niro and Netflix, having turned down Scorsese a reported 50 times to play Russell.  His performance is hardly what you might expect from Pesci in a Scorsese movie — gone is the hot-headed Tommy DeVito from “Goodfellas,” for which Pesci won an Oscar.  Instead, we have a surprisingly quiet Russell who doesn’t have to raise his voice to get what he wants, which is even more chilling.

It seems incredible that Pacino and Scorsese — two artists who seem made for collaboration — have never worked together, but it’s finally happened and the result is beyond any fan’s wildest dreams.  Pacino has been doing great TV work, particularly his Emmy-winning performance as Roy Cohn in 2003’s “Angels in America,” but he hasn’t been this good in a theatrical film in at least a quarter century.  From that first phone call on, Pacino takes the reins from De Niro and just runs with it, and “The Irishman” is much the better for it.  You can see in Pacino’s performance the charisma that Hoffa brought to his followers and the drive that sustained his desire for power.  Pacino had a number of towering performances in the 1970s, such as the first two “Godfather” films, “Serpico” and “Dog Day Afternoon.”  His performance in “The Irishman” ranks among them.

Which brings us to Robert De Niro.  The man who is considered by many to be the greatest film actor of his generation hasn’t exactly been slumming — he earned an Oscar nomination for 2012’s “Silver Linings Playbook” and carved out a comedy career in the “Meet the Parents” series.  But it’s been 24 years since he last worked with Scorsese (1995’s “Casino”), and his best work on film (“Taxi Driver,” “Raging Bull,” “Goodfellas”) has been with this director, so his return in a Scorsese project has been one of the most anticipated of the year.  De Niro does not disappoint, delivering a performance of such enormous subtlety that, while it comes as a surprise just how quiet it is, serves as the glue that ties the whole film together.  At the same time, he displays a tenderness in the film which we have rarely seen, and his final half-hour is absolutely devastating.

One of the prime topics of conversation about “The Irishman” is its use of de-aging technology, a process that erases the aging evident on the faces of the actors.  This allows Scorsese to film flashbacks of Frank and Russell, for example, from when they first meet, and both Pesci and De Niro appear as young facially as they did in “Goodfellas,” then ages them up until the actors appear as they do today.  (The technology is also incredibly expensive, which helps to explain the film’s $159 million budget, which Netflix was the only studio willing to bankroll.)  The effect is initially jarring when you first see it, but I got used to it very quickly, and the process does help to make the key flashbacks more convincing.  The only problem is still the actor’s movement — it’s a 46 year-old’s face on a 76 year-old’s body — and the effect is…strange.

Still, as there are so many memory-based films out there where characters look back at the highs and lows of their lives, “The Irishman” is different — all that Frank can look back and think about are the mistakes he has made, the bridges he’s burned and most of all, the shameful neglect of his family.  The effects of Frank’s neglect can always be seen on the reproachful face of his daughter Peggy (Anna Paquin, stunning in a virtually silent performance), and her rejection clearly haunts Frank as he looks back upon his life.

“The Irishman” is clearly the right film at the right time for Scorsese.  He could never have captured the regret and melancholy that makes “The Irishman” what it is at age 30 or 40.  Now that he is 77, he can with authority.  Everybody has regrets as they look back on their lives, but I can’t imagine that Scorsese has too many if he looks back upon his remarkable career.  It’s almost as if “The Irishman” suggests a final goodbye to the movies, but Scorsese is too obsessed about film for that.  He begins production in the spring of “Killers of the Flower Moon” with both De Niro and Leonardo DiCaprio in the spring, and we wish him well.  Until then, sir, thank you for “The Irishman.”

It is what it is.