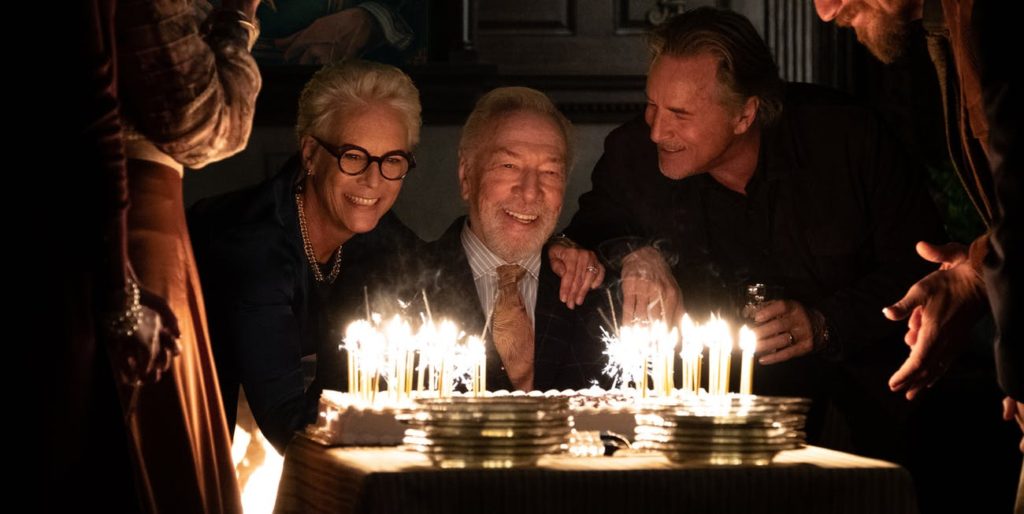 The whodunnit genre seems like it has been with us for ages, but it is the works of Dame Agatha Christie that really brought those stories to the forefront.  A number of films have followed Christie’s novels faithfully, most recently Kenneth Branagh’s remake of “Murder on the Orient Express” (2017).  But a few whodunnit films have taken liberties with Christie’s tried and true formula, most notably the bitchy “The Last of Sheila” (1973), written by composer Stephen Sondheim and actor Anthony Perkins.  “Knives Out” fits very comfortably in the latter category, and personally, I couldn’t be happier that it does.

Suddenly, Harlan is found with his throat slit, and while it seems like an open-and-shut case of suicide, police detective Elliot (Lakeith Stanfield of “Sorry to Bother You”) and Trooper Wagner (Noah Segan) have to fill in the story by interviewing the entire family to confirm that scenario.  However, Kentucky Fried private detective Benoit Blanc (Daniel Craig) has another theory — there was foul play at hand.

Blanc, with his Foghorn Leghorn drawl, sees Marta has his most reliable ally, since she pukes whenever she tells a lie.  To be honest, who actually dunnit was inconsequential to me, since I found the journey to get there was much more interesting.  Writer/director Rian Johnson is obviously a fan of the genre, and he takes an excruciatingly long time to reveal his secrets (which is just the way I like it).

The murder-mystery genre is one that allows actors to go big or go home.  Craig is far and away the hammiest of the bunch, with the same cornpone accent that he utilized in 2017’s “Logan Lucky,” and it’s just delightful.  Evans seems relieved to shed the good guy persona of Captain America to play an out-and-out jerk.  Colette, always such a serious actress, has a romp as this new-age, Trump-hating guru.  The entire cast, in fact, is solid.

But the real MVP of the cast is de Armas, a Cuban-born actress, whose Marta is the heart and soul (what heart there is) of “Knives Out.”  Marta’s mother is undocumented, so when Harlan’s will stipulates that Marta is the sole beneficiary of Harlan’s entire fortune, his greedy relatives use that fact as a cudgel against her.  But she will not move, and her courage is why the film’s final shot is so resonant.

Whodunnits constitute a largely disposable genre — once you find out whodunnit, most of these films are forgotten.  But “Knives Out” lingers long after the credits roll, in part because of the politics — this whodunnit takes place in the real world — and particularly of certain issues it addresses.  Foremost is the overwhelming question of class inequality.  Granted “Knives Out” is not as perceptive taking on the issue as, let’s say “Parasite,” but the fact that Johnson chooses to tackle it at all is commendable.

“Knives Out” is a hoot.  It also makes you pause to think, and that’s a good thing.

Is Makota Shinkai the New Future of Japanese Animation? With His Latest, “Weathering With You,” All Signs Indicate Yes