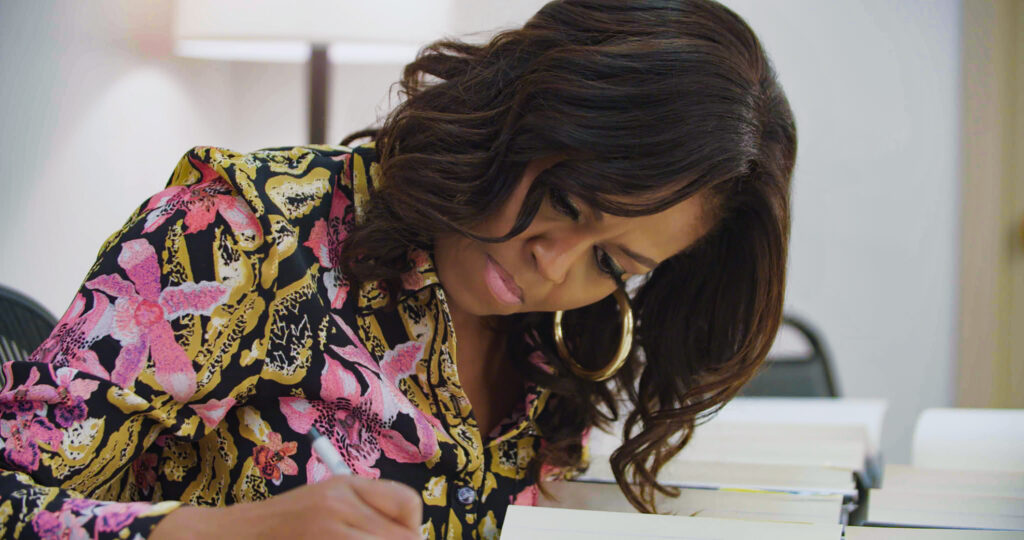 I was reading the New York Times online the other day and noticed that this coming week, Michelle Obama’s memoir “Becoming” has climbed to #2 on the Best Seller list after 74 weeks on the chart, an incredible feat for a memoir.  In fact, “Becoming” sold more books than any other in 2018 in just 15 days, a record.

So my ears perked up when I heard that “Becoming” would become a documentary film for Netflix, the third from the Obamas’ Higher Ground Productions.  Higher Ground’s first film, “American Factory,” hit a homer the first time up at bat, winning the Oscar as year’s best Documentary Feature.  Its second, “Crip Camp,” which was released on Netflix earlier this year, earned that same level of glowing notices.  “Becoming” is Higher Ground’s third film, and while it’s the least of the three, it will probably be the most popular because…Michelle.

If “Becoming” the book was actually “Becoming” the film, ready to be released on Blu-Ray, this Netflix documentary would be little more than a DVD extra.  This Netflix “Becoming” is less interested in the issues raised by the memoir and more concerned about the selling of “Becoming” the book with personal appearances in arenas all over the United States.  While it’s heartwarming to see the adulation from these thousands of people, mostly women, who show up, glued to her every word, we want a bit more.

This is not to say that she doesn’t reveal some gems from her life in the White House, prodded by such celebrity moderators as Oprah Winfrey, Conan O’Brien, Valerie Jarrett, Gayle King, and Stephen Colbert.  But, for the most part, they are generalized observations that would be right at home on the Colbert stage.

If the first half of “Becoming” feels a bit too much like an infomercial for the book, the film’s more relaxed second half reveals more of the Michelle that we came to see.  When she first burst onto the national stage in 2007, she seemed like a breath of fresh air, and her off-the-cuff observations felt like a tonic from the canned responses that political spouses had tended to recite.  But right-wing media, particularly Fox News, saw that attacking her was a quick way to get to her fast-rising husband in the Democratic Presidential race.  Any number of racist insults were hurled in Michelle’s direction, even, at one point, insinuating that she was a terrorist.  From that point, she clammed up and became, by her own admission, more scripted.

Today, Michelle is less scripted but remains cautious.  Still, around friends and family, she does let her hair down on a visit to her childhood home with her mother Miriam, who was a regular around the White House during the Obama years.  (Getting to know Miriam and Michelle’s brother Craig a bit better is one of the joys of “Becoming.”)  But, to me, the heart and soul of the film version of “Becoming” are the round-table discussions that Michelle conducts with small groups — teenagers who are apprehensive about college; Native-American teenagers worried about where they will fit into society; and African-American church-going seniors who discuss just what the Obama years meant to them.  What’s fascinating here is that Michelle isn’t talking — she’s listening — and when she does respond, it illuminates so much about her values in a way that a canned speech could never deliver.

If you can get past the half-hour infomercial that begins “Becoming,” there is much to like in the film’s second half, with a glimpse…just a glimpse…of the Michelle Obama that beneath the layers of protective caution, we all know is still there.