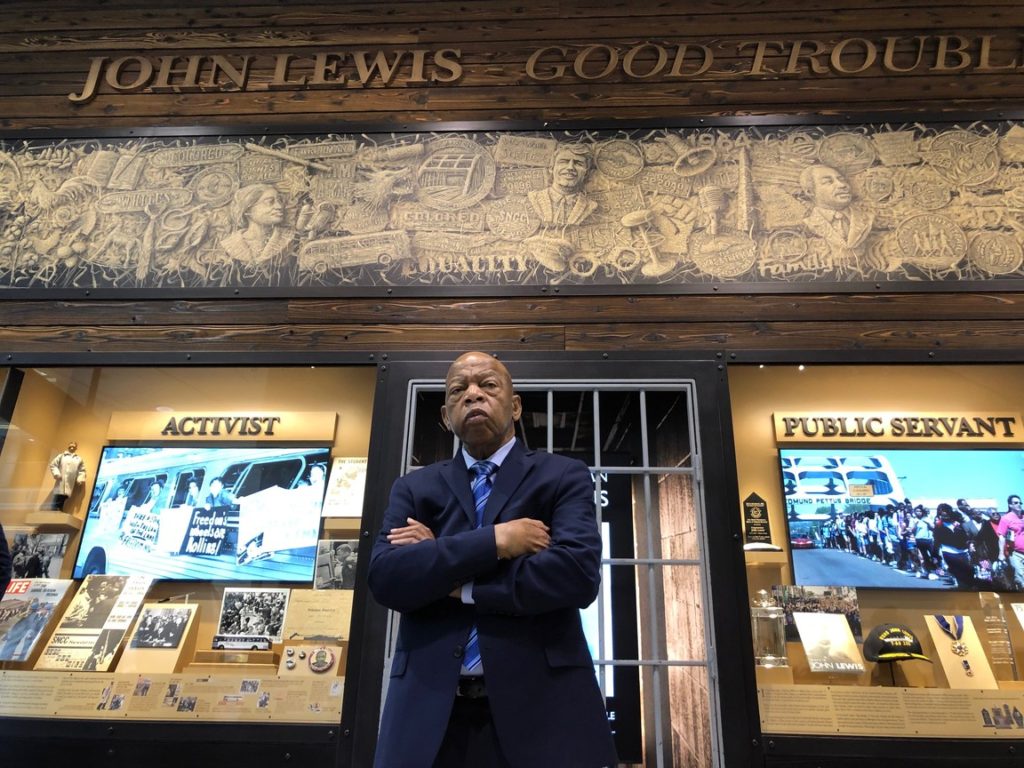 John Lewis, who died on Friday at the age of 80, was a real-life American hero.  I don’t use a word like that lightly, but Lewis talked the talk, and more importantly, he walked the very perilous walk.  From putting his body on the line on Selma’s Edmund Pettus Bridge in 1965 to making many of his colleagues uncomfortable with his principled stands during his 17 terms in Congress, Lewis spent a lifetime getting into trouble, a trait of which he was very proud.  “Get in trouble,” he has urged those who want to make a difference.  “Good trouble. Necessary trouble.”

By coincidence, director Dawn Porter’s profile of the civil rights icon, “John Lewis: Good Trouble,” happened to  be released on streaming services just a few weeks ago.  The film, produced by CNN’s documentary unit, follows the template of another CNN success, 2018’s Oscar nominee “RBG,” in which an American icon is profiled in what is a celebration of their lives.  Luckily, Rep. Lewis and Justice Ruth Bader Ginsburg have each led such remarkable lives that each is worthy of a feature film treatment.

At the age of 23, young John Lewis distinguished himself as chairman of the civil rights group, the Student Non-Violent Coordinating Committee (SNCC), and was one of the “Big Six” civil rights leaders who planned the legendary 1963 March on Washington, where Lewis gave a provocative and powerful speech.  As a kid, I first took notice of Lewis while I watched news footage of the march over the bridge from Selma to Montgomery. My first thought about him was “Why would anyone wear a raincoat and a backpack to a march?” That feeling quickly gave way to horror as I watched Lewis in that raincoat being clubbed in the head by police and beaten to within an inch of his life.  For the next 55 years, Lewis continued to get into such good (and sometimes dangerous) trouble, both on the streets of America and in the halls of Congress, where he brought the same zeal he had during his civil rights days .

Porter’s film is fine, mixing a well-trodden formula of mixing newly-filmed interviews with Lewis’ friends and colleagues, as well as with the Congressman himself, with archive footage of Lewis’ early and later life.  But Lewis is such an interesting subject for a biodoc that, even if you’re already familiar with his life, your interest in him never wanes.

As fervent as he could be in his speeches and his dedication for civil rights for all (he was an early supporter of the LGBTQ rights movement), there was a bit of a goofy side to this American icon. Can you think of another person of his importance writing about his struggles in the form of a three-volume graphic novel?  Lewis had a way with people, as we see numerous examples of his joyful interactions with constituents and fans, as well as a particular way of letting loose when we see him joyfully dancing along to Pharrell Williams’ “Happy.”   (Alas, we are missing that famous clip of Lewis, at age 76, crowd-surfing the audience at a Stephen Colbert taping. You can’t have everything, I guess.)

Now only does the film make it clear that Rep. Lewis was properly nicknamed “The Conscience of Congress,” but it reminds us, thanks to his longevity, that he served as a bridge between the civil rights marchers then and the Black Lives Matter protesters today.  In face, his final public appearance was at poignant one at the Black Lives Matter street mural in Washington, D.C last month.

After watching “John Lewis: Good Trouble,” I just have one request.  That bridge in Selma named after a Grand Wizard of the Ku Klux Klan where John Lewis was beaten?  Please rename it for a real American hero.  Name it the John Lewis Bridge.