Now Playing In Your Living Room: A Surprisingly Empathetic Look at One Man’s Quest for Redemption in “You Cannot Kill David Arquette” 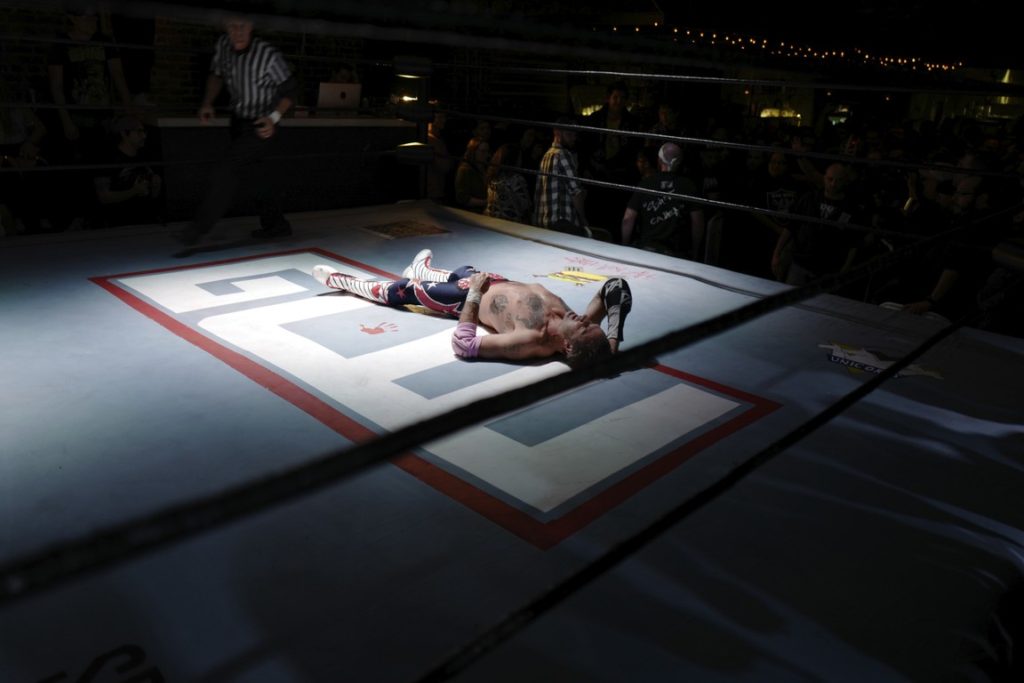 Despite the documentary’s provocative title, “You Cannot Kill David Arquette” is a surprisingly sympathetic documentary focusing on how the actor is managing his eclectic career. Primarily known to audiences as the goofy Deputy Dewey Riley in the “Scream” series of films, Arquette has recently been going through a dry spell in terms of roles. As he notes in the film, he has been auditioning for different kinds of parts in the past 10 years with little success.

If there is one thing that gnaws at him, however, is the perception that, in professional wrestling circles, he is seen as a traitor to the sport. This dates back to 2000, when Arquette, a huge pro wrestling fan, was on the press circuit promoting his wrestling-based movie, “Ready to Rumble.” Given the fact that Warner Bros., which was releasing the film, owned Turner Broadcasting, home of the World Championship Wrestling (WCW) franchise, a crossover promotion seemed like the perfect fit. The only problem was that Vince Russo, the head writer for the WCW storylines, wanted Arquette to win the WCW Championship in a Sudden Death match.

Arquette, who, as a fan, knew that a pretender to the WCW throne would enrage fellow fans, asked if could not win the title, but Russo was adamant. In support of the film, Arquette reluctantly agreed, but just what he feared actually happened — Arquette as WCW champion became both a joke and a pariah in the wrestling world.

In 2019, he decides to rehabilitate his reputation among wrestling fans by working his way up and grappling in matches at the lowest level (backyard wrestling), with opponents who hate him make sure to knock the crap out of Arquette. But he is determined to carry on, and the bloodied Arquette’s quest finally comes to the attention of wrestling legend Diamond Dallas Page who agrees to train him properly with some Lucha Libre wrestlers from Mexico. Will this be enough to salvage Arquette’s reputation among wrestling fans?

What broadens the appeal of the film is Arquette’s attempt to explain his concern with his wrestling reputation to his sisters, Oscar-winner Patricia and BAFTA-winner Rosanna. His sisters are baffled by his obsession but nonetheless support their brother in whatever crazy scheme with which he’s involved.

The filmmaking skills in “You Cannot Kill David Arquette” by co-directors David Darg and Price James are OK, still leaning largely on the charisma of the film’s subject. I can understand how audiences might be turned off by Arquette’s manboy obsession with regaining his reputation in the wrestling world, but as a pro wrestling fan of a certain age, I loved the behind-the-scenes look at how the wrestling storylines are shaped and how Arquette’s dilemma is portrayed.

“You Cannot Kill David Arquette” is a film that is designed for a certain niche audience, but of you’re in that niche, I suspect you’re going to love it.

“You Cannot Kill David Arquette” is now playing at drive-in theaters nationwide and can be bought or rented at iTunes and other streaming services.

This review was originally published at Next Best Picture.

Will We Ever Be Able To See a New Film Comedy in a Movie Theater Again?