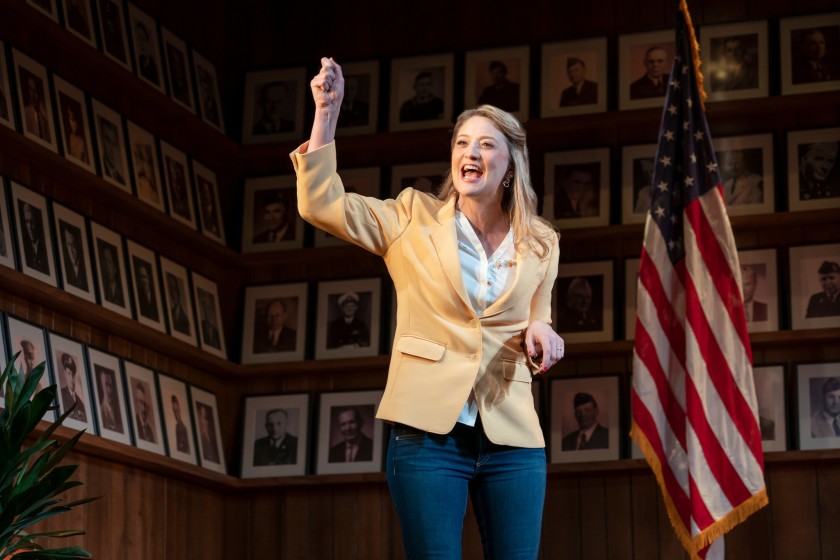 You can’t say that director Marielle Heller shies away from a challenge.

After her acclaimed directing debut, 2015’s “Diary of a Teenage Girl,” Heller faced the task of turning comic actress Melissa McCarthy into a sullen plagiarist in 2018’s “Can You Ever Forgive Me?”  The result?  Heller’s direction led to McCarthy’s second Oscar nomination and her first for a dramatic role.  Then with last year’s “A Beautiful Day in the Neighborhood,” Heller faced the challenge of keeping the Mr. Rogers film from being too sweet and treacly.  Under Heller’s firm hand, Tom Hanks as Rogers earned his first Academy Award nomination in 19 years.

Now Heller faces a completely different challenge — filming a play.  “Where’s the challenge?” you might ask.  You plunk the camera down and film the show, right?  It’s not nearly as easy as that.  If you’ve seen the Disney+ production of “Hamilton,” you might have noticed that one of the most important directorial decisions in it is where to place the camera so to steer the audience toward what is most crucial from a stage filled with people.

Here Heller has a completely different challenge — a stage filled with one person, then later two and finally three.  “Hamilton” rolled along in part by having so many people and so many stories.  Here we have one story and one person.  How do you keep the momentum going?  Well, first of all, you need good material.

And here Heller is lucky enough to have great material — Heidi Schreck’s comedy “What the Constitution Means to Me,” which was a Tony Award nominee and a finalist for the Pulitzer Prize. (The fact that the Pulitzer nominating committee embraced a comedy should tell you just how good it is.)

The premise appears to be simple: Schreck takes the stage to explain that, as a 15 year-old, she began to take part in Constitutional debate contests at American Legion halls around the country, inevitably winning the cash prize which went to her college tuition fund. (She won so many prizes that they financed her entire college education with her winnings.)  Suddenly, she becomes her 15 year-old self and presents her speech under the watchful eye of a gruff American Legion moderator (Mike Iveson).

Though it is a one-act play, that one act is broken down into a movie structure with three very different sub-acts.  By the time we get to sub-act two, Heller has removed her suit jacket and Iveson has doffed his Legion costume, and the two actors address the audience as their real selves.  Iveson, an out gay actor, describes the anti-LGBTQ harassment he suffered as a young man, and Schreck tells a harrowing history of the women in her family beating beaten by their men, tying all of it in with the Constitution and its protections (or lack thereof).

Sub-act three takes another sharp left turn when Schreck brings on a 15 year-old Constitutional debater of today — Rosdely Ciprian — who joins Schreck in a debate-off, their positions on whether the Constitution should be replaced being determined by the flip of a coin. We’re in serious improv territory here, and I must say, when I saw the show in Los Angeles last February, my sub-act three, because of the result of the coin toss, was completely different than here. It’s a real high wire act, one which Schreck (as well as Ciprian and Heller) pull off beautifully.

I suspect that my description makes the movie seem unreasonably complicated, but when you see the film, everything falls into place beautifully, which is in the strength of the writing.  And Schreck’s triumph has shifted my own viewpoint to never view the Constitution the same way again.

“What the Constitution Means to Me” is currently streaming on Amazon Prime.