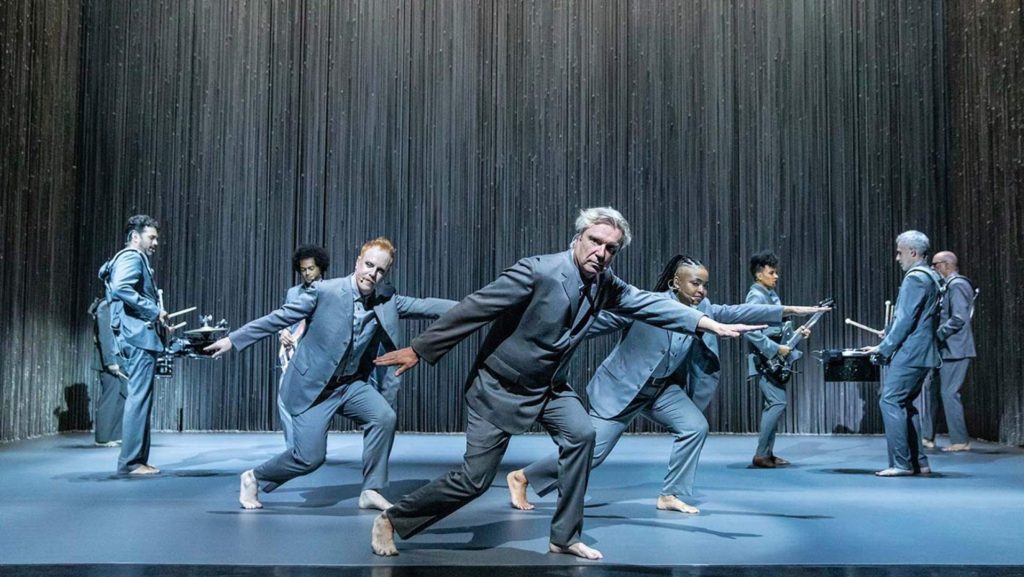 Please allow me to whine for a moment.  Last winter, when “David Byrne’s American Utopia” was selling out on Broadway at the Hudson Theater, I vowed to myself that I would get to New York to see it.  But one thing after another occurred, and then there was COVID, with Broadway shutting down.  I’m still kicking myself for missing it.

Enter Spike Lee to the rescue.  For many of my closest (and deeply mistaken) friends, their favorite concert film is Martin Scorsese’s 1978 “The Last Waltz,” the director’s acclaimed capturing of The Band in concert.  The correct answer (as far as I’m concerned, at least) is Jonathan Demme’s 1984 classic “Stop Making Sense,” which captured Byrne & Talking Heads at the peak of their musical power.

Lee’s film of “American Utopia” rivals that classic. Now playing on HBO and HBO Max, Lee’s film has much more in common with Thomas Kail’s Broadway capture of “Hamilton” than Marielle Heller’s film of “What the Constitution Means to Me,” in which audience reaction is an integral part. “American Utopia,” which has little audience reaction, is strictly a concert film, but what a concert!

As part of a barefoot ensemble clad in sharp sharkskin suits, Byrne offers highlights from his 2018 album “American Utopia,” as well as such crowd-pleasing Talking Heads classics as “Road to Nowhere,” “Once in a Lifetime” and “Burning Down the House.”

Bryne has always been an interesting character — to my mind, he’s probably the oddest rock star out there, because he has a message to give through his music but he lacks (or chooses not to have) the male bravado that most rock stars have traditionally displayed. And for that reason, at least to me, that makes him fascinating and draws me closer to his performances.

Lee, who is no stranger to filming stage productions, the highlight being his 2008 film of Stew’s Broadway show of “Passing Strange,” knows just how to film a stage musical. Some filmmakers who attempt concert films just plunk the camera down and capture the stage performance, which is meh. Lee, like Kail in “Hamilton,” knows exactly where the camera should be placed to accentuate what the stage director intended to emphasize. It’s may be a technical thing, but, by doing that, it raises Lee’s film up to be a narrative, as opposed to a mere recording, and helps to explain why this film of “American Utopia” is so good.

As we negotiate through this stressful political week, a film filled with great songs just feels like the balm we all need. So sit back, enjoy “American Utopia” and leave room for dancing.